Banning neonicotinoids in the EU: an ex-post assessment of economic and environmental costs

Neonicotinoids have been under discussion for representing a risk to wild bees and honeybees. Since 1 December 2013 farmers have been unable to purchase or sow seeds of crop varieties known to be attractive to bees if the seeds have been treated with neonicotinoids. The European Commission, however, has confirmed that a review of new scientific information will take place within two years of this ban. Considering this statement, the HFFA Research Paper 01/2017 analyses the economic and environmental impacts of the neonicotinoid ban in European agriculture based on the study of oilseed rape (OSR).

Steffen Noleppa (HFFA Research), the corresponding author of this study, bases his findings on a comprehensive meta-analysis of existing literature, as well as scientific modelling and calculation approaches. Based on the meta-analysis, the aforementioned ban on neonicotinoids has been found to cause an average decrease in OSR yield of 4.0 percent and maximum losses of around 20%. Some of the analysed studies found quality impacts such as smaller seeds and lower oil content. These have been found in 6.3 percent of OSR harvest volume. These quality depressions account for a price difference of 36.50 EUR per ton affected.

As a result from these quality and yield effects, the ban on neonicotinoids would lead to an annual production loss of 912,000 tons of OSR in the European Union. This is equivalent to a loss of around 400 million EUR annually. The application of pyrethroids as a second-best solution is conservatively estimated to increase the cost of OSR production in the European Union by 120 million EUR annually. Combined with annual economic costs on-farm, the losses resulting from a ban on neonicotinoids are then expected to accumulate to over 510 million EUR.

The author also points out the environmental effects of the potential ban. Accordingly, lower yields due to decreased OSR productivity would lead to around 533,000 hectares of global land conversion. Concern is also raised about the fact that resistance issues may appear, as the use of alternative plant protection products would intensify, and farmers would be left with fewer options to choose from. Ultimately, the study acknowledges the positive implications which a neonicotinoid ban would have for certain specific environmental aspects. While these positive implications seem widely accepted, the negative consequences of not applying a powerful technology also need to be discussed and understood before coming to a final conclusion. 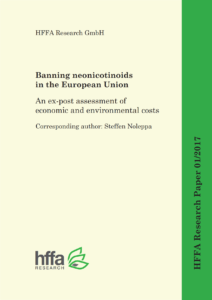