The value of agricultural productivity in the EU: impacts on water trade and water use

Agricultural production currently accounts for up to 70 percent of human freshwater consumption – and water use by global agriculture continues to grow. At the same time, population growth, water demand from other sectors and ongoing climate change will increase the future pressure on water availability for agricultural production. As the agricultural sector uses vast amounts of the global freshwater supply, agriculture is considered a substantial contributor to some major future environmental problems. These include ecosystem degradation, habitat loss, drying up of rivers and groundwater reduction.

In this context, the newest research paper by Steffen Noleppa and Matti Cartsburg (both HFFA Research) takes a close look at virtual water trade (VWT) and water productivity (WP) in the agricultural production of the European Union (EU). The study focusses on eight major arable crops cultivated in the EU: wheat, corn, other cereals, oilseed rape, other oilseeds, sugar crops, potatoes, and pulses. 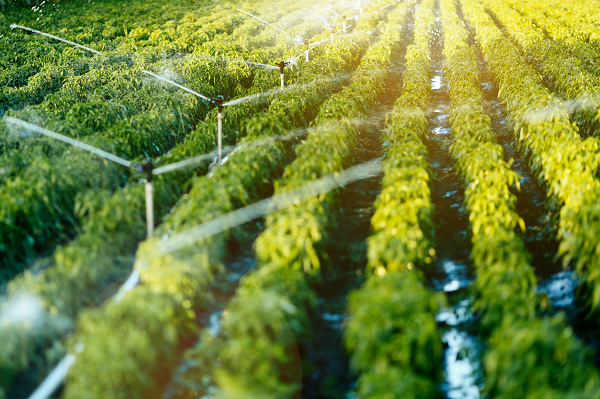 On balance, the EU is currently a net importer of water used for agricultural purposes. More than 100 billion m³ of water are virtually net imported by the EU member states each year in the form of agricultural and food products. Most of this water is associated with rain-fed agriculture, while only a minor share is attributed to irrigation. However, the regional and commodity specific balances are very diverse. For example, at the individual crop level, the EU is a net exporter of agricultural water as an input for wheat and other cereals. These are crops for which the EU has a comparative production advantage. Also, while the EU is overall a net importer of water from most regions in the world, the EU is virtually exporting agricultural water to the MENA region and to the Rest of Europe.

The study also compares the water use effects of high input agriculture to the alternative of low input farming. While a complete shift to low input farming would reduce the domestic use of agricultural water, it would also lead to an additional import of more than 142 billion m³ of virtual agricultural water into the EU. The overall virtual water trade of the EU (including all crop and livestock commodities) would change from around 107 billion m³ to almost 250 billion m³ – more than half of the water of Lake Erie. Intensive plant production in the EU currently saves an amount of water approximately eight times larger than the combined current water use of all households in Germany. The authors conclude that productive agriculture in the EU allows for using less water compared to low input farming, contributing significantly to a reduction of water resource use at a global scale.

This research paper is the second part of a series that aims to quantify the value generated by productive agriculture for farmers, consumers and society. The first part of this series (The social, economic and environmental value of agricultural productivity in the EU: Impacts on markets and food security, rural income and employment, resource use, climate protection, and biodiversity, published in 2013), did not include water issues. 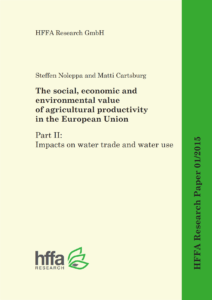